Welcome to my weird travels page...will be updating this as my travels get weirder, so check back to see where the winds of weird take me (note - these locations are well known, and at no time should these entries be considered investigations.  Sometimes I just like to wander around and check out the places others consider "haunted" or "spooky" - a guy has to have fun, you know!) 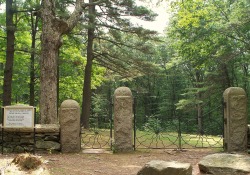 No cemetery in Massachusetts has a more haunted and notorious  reputation than Friends Cemetery, better known to many throughout New England as Spider Gates.  This cemetery, nestled quietly into the suburban landscape just outside the Worcester Airport in Leicester, Massachusetts, dates back to the 18th century and was the Southwick and Earle family cemetery.  At some point the families became converts as Quakers and the cemetery was turned over to the Friends church.

As a teenager I would always hear the name Spider Gates mentioned by kids my age, and the stories that were told then mirror the newer tales still rattling around the world wide web today.

First, it is said that their are 8 gates in or around the cemetery, and if you pass through each gate you will find yourself closer and closer to reaching the netherworld.  In reality there is only one gate, wrought from iron and fashioned into a pattern that many could consider a spider design.

Just inside the cemetery is a large tree with a crook about 20 feet off the ground, and it is said that this tree was the location of a suicide by a local teen-aged boy back in the 1980s.  Records show, however, that no suicides have ever occurred in the cemetery.  A length of twine that is heavily reported in this tree, rumored to be the "hanging rope" has been removed.

In the center of the cemetery is a raised plot of earth with four granite pillars at the corners.  It has been rumored that this elevated plateau is known as "the alter", and that Satanic cults have secured the right to conduct rituals on it.  In actuality the raised area in the cemetery was the footprint of the original Friends meeting house, now long gone.  Satanists have never been allowed to practice in the cemetery, either.

Other reports of ghostly activity are the sounds of moans and other strange noises coming from the surrounding woods, which are all more than likely the result of aircraft from the nearby airport.  On my visit I heard several jets either on takeoff or approach that produced noises that seemed to rumble and echo from all around.  Voices are also said to be heard, but while visiting the cemetery I heard no voices other than those of my companions.  Also, I never encountered any apparitions, felt any cold spots, or anything else that would suggest that Friend's Cemetery is nothing more than a quaint New England burial ground.

Their are many different websites that have documented Friends Cemetery over the years, and I suggest one in particular if you are planning your own trip there.

You can find this site here: 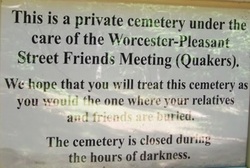 Please be respectful and follow the rules set down by the owners.  DO NOT TRESPASS.  The Leicester Police will take notice, and the Friend's Church will prosecute.  Visit during the noted daytime hours ONLY.  If you know of or are aware of any researchers visiting Friend's Cemetery after dark, feel free to reach me at d.francis@rocketmail.com. 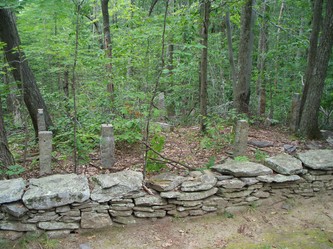 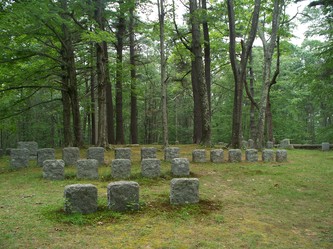 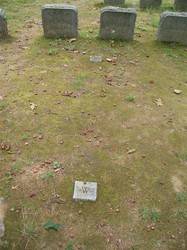 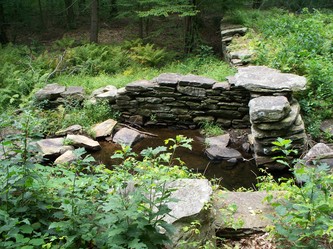